These are most commonly used prisms. They deviate the light beam by 90 degrees or by 180 degrees depending in the mode in which they are used. The hypotenuse face can be aluminized if required.

These prisms have three equal angles of 60 degrees. They disperse the light beam into its constituent colors. 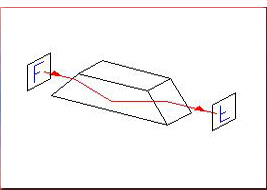 They are used for rotating the image in a variety of applications. Their peculiar characteristic is that the images rotates at twice the rate of rotation of the prism.

These are also known as retro reflectors. They reflect the incident beam back along the same path regardless of the angle of incidence. This means that they do not have to be aligned very precisely.

These prisms have five sides and deviate the incident beam by 90 degrees regardless of the incident angle. They do not invert or revert the image. The reflecting surfaces are aluminized.

Also known as Amici prisms, these are right-angled prisms having a "roof" on the hypotenuse. They deviate the incident beam by 90 degrees and also invert the image.

These are combination of three prisms of different optical glasses, which gives dispersion of the light without deviation.